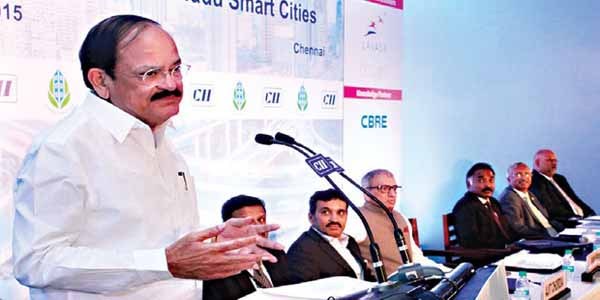 Union Urban Development Ministry has given an order to the Municipal Corporation of the states for the submission of city level smart city plan before the December 15. The Ministry will not extend the time duration of Smart City Plan of the cities.

This decision was taken by the Ministry at a meeting with Principal Secretaries of state Urban Development departments and Municipal Commissioners of some cities.

Against the issues of Municipal Corporation for the submission of Smart City Plan. But the Urban Development Minister M Venkaiah Naidu not ready for such extension beyond December 15.

But in the final discussion with states the Municipal Corporation of the cities will hard work for the preparation of Smart City Plan with the inclusion of citizens ideas, suggestions, and smart solutions.

The smart city mission was launched by the Prime Minister in June in this year and finally 98 cities has been selected by the Ministry of Urban Development (MoUD).
This first round of selection of 98 cities was made based on competition among various urban local bodies in each state, based on a set of criteria.

In the second stage of ‘City Challenge’ competition, top 20 cities will be selected from among the 98 city level Smart City Plans to be received by December 15, for financing during the current financial year.

After the selection of top 20 cities in second round the centre will provide Rs 200 crore each during this financial year followed by Rs 100 crore per year during the next three years.

The centre has already released the fund of Rs. 200 crore for the preparation smart city plan.

The post Some Municipal Corporation raised issue for the time duration of Smart City Plan Submission appeared first on .

CELEBRITIES, MUSICIANS, AND THOUGHT LEADERS TO JOIN AL GORE FOR 24 HOURS OF REALITY: PROTECT OUR PLANET, PROTECT OURSELVES BROADCAST