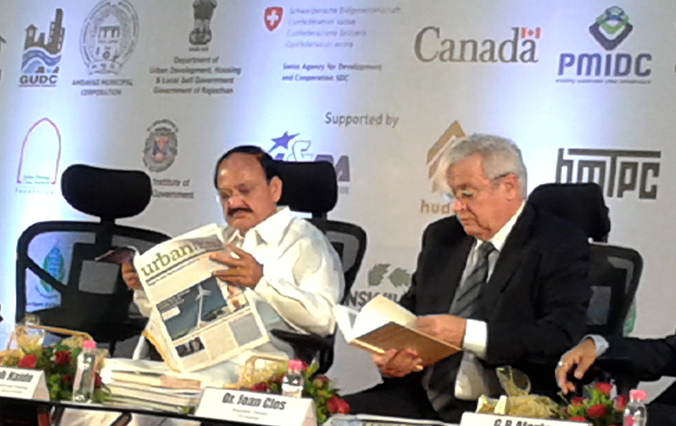 While some projects for some of these cities were approved and funds released earlier, comprehensive action plans were cleared today.

Various cities have been divided into different zones for taking up different infrastructure development projects for enhancing the appeal of mission cities which are centres of rich cultural heritage.

Heritage development in Varanasi will be taken up at a cost of Rs.130 cr by undertaking different projects in 4 zones of the city. These include : development of pedestrian pathways from Maidagin to Gondolia Chowk to Dasashwamedh Ghat, façade improvement, multilevel parking and solid waste management at a cost of Rs.20 cr. Thirty roads will be developed in different heritage zones at a cost of Rs.22 cr. Proposed investments will include Rs.89.31 cr allocated for Varanasi under HRIDAY besides under other schemes.

In Mathura, necessary infrastructure development will be taken up in 6 different zones at a cost of Rs.41.37 cr for the benefit of Krishnajanmabhoomi Area, Chatta Bazar, Vishram Ghat, Shiv Tal Kund and Masani, Bharatpur, Bhuteswar chowks. 2.60 km long Vrindavan Parikrama will be developed at a cost of Rs.9.26 cr.

Dwaraka in Gujarat will be made more visitor friendly at a cost of Rs.19.56 cr through landscape development, footpaths and provision of other amenities.

Badami in Karnataka will witness a significant facelift at a cost of Rs.61.86 cr. This includes an investment of Rs.10 cr by the Archeological Survey of India and Bagalkot district administration on resettlement and rehabilitation of 72 families near Agastya Lake and Rs.8.00 cr by the state government on improvement of arterial roads.

The Church town of Vellankini in Tamil Nadu will get a make over with an investment of Rs.42.26 cr including development of a cultural park at a cost of Rs.8.00 cr and relocation of a new bus stand at a cost of Rs.6.00 cr.

The seat of Buddhism of Amaravati in Andhra Pradesh will be improved at a cost of Rs.20.33 cr under HRIDAY. Access to Dharanikota Fort, Amaravati Pond, Mahachaitya Stupa, Amaralingeswara Swamy Temple, Kalachakra Museum, Dhyanabuddha Statue and Zamindar Bungalow will be improved through improved roads and access. An interpretation centre and a walkway of 2.50 kms will also be developed.

The HRIDAY National Empowered Committee urged the Ministry of Tourism to expedite approvals for various projects worth Rs.32 cr under consideration for Amaravati.

Cities can change the game in the fight against emissions and air pollution. Fossil fuel bans jump fivefold in 2020.