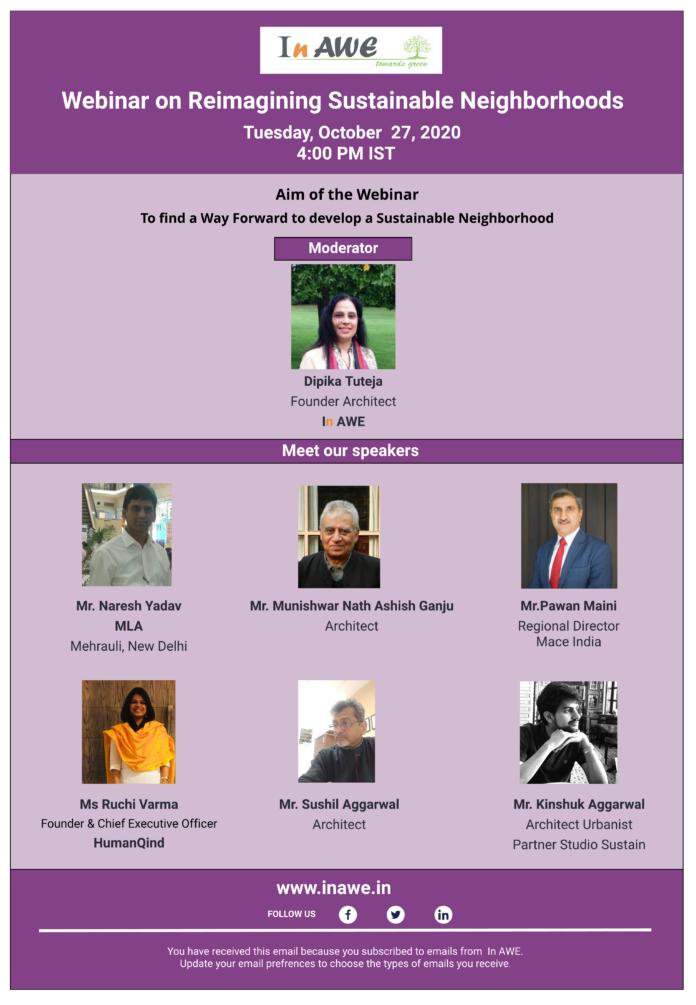 Live Sustainably is an initiative of In AWE, where we are looking at bringing change at the grass root level. Citizens, who make a major part of the users and respondents, need to become a part of this exercise.

Aim of the webinar on Reimagining Sustainable Neighborhoods’, first of the series of Live Sustainably, is to find solutions and a way forward to reality.

Neighborhood is the smallest denominator in urban planning. Going back in time, cities in reference are Delhi & Chandigarh, which were planned on the concept of self-sufficient neighborhoods within the limited boundaries. Neighborhood was interwoven with the main and sub arterial roads. Houses were planned around a common green area and the neighborhood amenities were at a walking distance. Ideally the size of a neighborhood was strategically planned in such a way that a majority of the population was accommodated within a walking distance of five-minutes from its center where most of the daily lives’ needs were available within this area. This type of zoning activities to a great extent diminished the amount and interval of automobile trips, and contributed towards low carbon footprint.

With time, a single unit has been re-modelled into three or four units, thus increasing the transportation requirements. Roads with pedestrian paths have disappeared to accommodate the surging vehicles. Informal vendors have taken over the paths meant for cyclists. Parks and green areas were embedded in the lifestyle. Walking was a reflexive way of commuting. Day to day requirements was met within the local markets.

Issues of sustainability have arisen due to rampant development in the developing as well as the developed countries. Some of the ramifications have been on Air quality, traffic snarls, increased FAR, changed land use etc.

The Delhi Development Authority’s focus in the ‘Master Plan for Delhi-2041’ will be on sustainable and green mobility, along with accessible high-quality public transport. The agency’s focus will also be on walkable humane neighborhoods and public areas.

How do you solve a problem like traffic, noise and pollution in our growing cities? For the Spanish city of Barcelona, the answer could lie in the creation of ‘superblocks. Under the plans, the Catalan capital intends to restrict traffic to a number of big roads, creating pedestrianized, small communities within the city’s grid system. It’s hoped that doing so could reduce traffic by 21 percent as well as free up around 60 percent of the city’s streets.

The basic factors that contribute to a good quality of life.

World Environment Day 2021: Green environment is the way of future by Tripat Girdhar