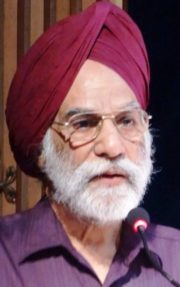 The Secretariat is the “law-executing” edifice, is an enormous structure placed in a striking position at a right angle to the Shivalik Hills, which is Chandigarh’s most magnificent natural landmark. The idea was to not obstruct the beautiful view that Le Corbusier loved so much.

The Secretariat façade is a sensitively modulated screen of sun-breaks, with vast areas of repeated pattern, to which life has been brought with the use of balconied projections, recesses, large windows, double heights, and so on. The skyline is lyricised with terrace-restaurant, ramp-volume, loggia or view-stand, lift-towers, etc. The horizontal bands are carried onto the end-elevation to obviate its boxiness, and to give a visual clue to the emphatic horizontality of the building. A careful look at the Secretariat will reveal Le Corbusier’s mastery at what I call aesthetic detailing, exploiting the visual elements of point, line, shape, and their juxtaposition.

With its great size (254 metres long and 42 metres high: these are the actual dimensions, and not what Le Corbusier has mentioned in his note), the Secretariat assumes the aspect of a massive wall enclosing the Capitol Complex on the north-west. The building is composed of six 8-storeyed blocks separated by expansion joints. The central pavilion, block 4, contains the offices of the ministers. These have been defined on the façade by a distinctive brise-soleil of deeply sculptured, two-storeyed high porticos.

Almost 800-feet-long, the Secretariat must be one of the longest bureaucracies in the world. The building is an enormous mass of a rectangular prism, which stands as a giant wall to enclose the space of the Capitol Complex on its north-western side.

One plausible reason why Le Corbusier was led to place the Secretariat building on this side of the Capitol Complex is that he had wanted “the edifice” to be viewed from the promenade of the Sukhna Lake with a vast sheet of shimmering water in the foreground. Needless to say that this aim could not have been accomplished if this “longest bureaucracy” were to be sited on the south-eastern end of the Capitol Complex. But a significant, if abstruse, design criterion for the present siting of the Secretariat might have been determined by the manner in which many people, used to reading the scripts of various languages in a certain way, tend to view objects in space regarding it as a 3-dimensional sheet of paper. Their reading habits “condition” them to “read” a group of buildings from left to right as naturally as they would read the script of their language. Thus, placement of the Secretariat, as the heaviest mass on the left side of the Capitol Complex, has implicitly helped to appreciate its overall composition as a “natural” (and, therefore, well-balanced) organisation of buildings in architectural space. In a similar way, the siting of the Secretariat at a right angle to the Shivalik Hills testifies to Le Corbusier’s mastery of scale and of integrating man-made objects with natural elements in one organic whole. He has ingeniously made his grand architectural composition of the Capitol Complex an integral part of the beautiful backdrop of the giant natural feature: the Shivalik Hills.

The rectilinearity of the geometric shape is given a great lateral thrust by the horizontal lines of the brise-soleil screen. The building mass has been broken up by such devices as double-height spaces, the loggia or a view-stand, the ramp-volume, the terrace-restaurant, lift- and stair-towers, etc. But perhaps the most important single element which accomplishes this aim of relieving the monotony of repeated pattern is its change in the brise-soleil screen in the area reserved for the ministers, the Chief Minister, and the Governor. Not only does this method liven up the visual appeal of the enormous façade but also provides a focal point for the main entrance. The repeated pattern is what gives the building its expressive visual power while the variations in it only heighten its mythic potency.

Without the now-familiar rooftop elements of Corbusian architecture, the Secretariat building would have had a bald skyline. The strategically placed terrace-restaurant has been connected with a strong triangular volume to act as a unifying element in the total architectural composition. The visual tension created by this diagonal line in a basic design exercise of horizontals and verticals is what holds together the disparate elements deployed in their organisations. It is this aspect, rather than the functional efficiency of the building, which deserves notice. The problems of function and performance were relegated to a secondary consideration, which can now be appreciated in all works of Le Corbusier, in the pursuit of monumentality with which the master architect sought to invest “the edifices” of the Capitol Complex.

Considered in this light, Albert Mayer’s remarks, that he found the Secretariat “crude and chunky”, considering the “huge blob”, containing the ramp “ugly and misshapen”, are somewhat self-opinionated. So also are the observations of Maxwell Fry concerning the Secretariat façade treatment that “…one may wonder whether this is how the monotony of a repeated pattern should be broken up, and whether also the mark of distinction given to the higher ranks of government is not after all somewhat perfunctory.”

While it may not be possible to defend the functional inadequacies of the Secretariat, it can be stated with certainty that its architectural expression shows Le Corbusier’s “mastery of form” as a finality of artistic ingeniousness. Few office buildings in the world would be able to match the fluid grace and aesthetic enchantment of the Secretariat building. If Le Corbusier ever succeeded in elevating the mundane and the prosaic to the level of the extraordinary and the poetic, it was in this one building—the Secretariat of Chandigarh.