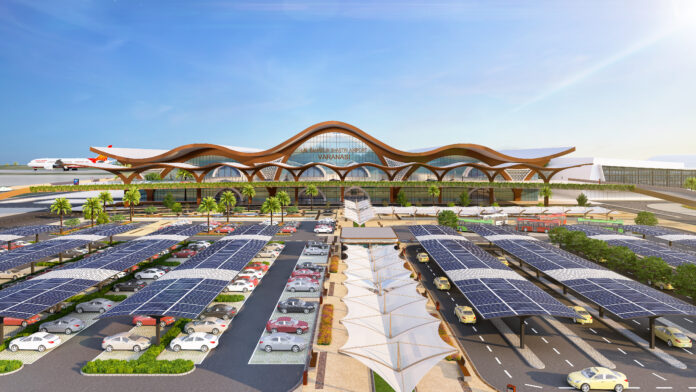 EXCERPTS OF THE CONVERSATION

Kritika Juneja: -Initially airports were merely considered as transit points but your firm has bought an architectural reformation in the design of airports by combining the essence of culture and belongingness of the place. One such example is Varanasi Airport where the Banarasi saree pattern, moss walls, boat shaped sculptures present a uniquely crafted look of Varanasi to a visitor.

How do you drive on the concept of any airport while maintaining its identity?

Prof. Charanjit Singh Shah: – Architecture in today’s context is global empowerment and perhaps not the global intervention.But still we need to address the architecture and the built form respecting the place and people so that we have the belongingness to the architecture and the human settlement. We were very ambitious in the initial stage and we created dynamism in airport planning with large span structures, mega structures like Chennai Airport where technology played a very vital role. Perhaps after Chennai we made a very complex structure in Raipur Airport.

Subsequently we developed Vadodara Airport wherein we developed dynamism into a simplistic sustainable form. During this process of designing various airports, it was a great learning for us and then we realised that the form perhaps needs to be spoken where it gives us the belongingness to the place and for the people. That is how there was a transformation within us to create that sort of architecture that belongs to the place and the people. And, that is how we designed starting from Shirdi Airport to Bhubaneshwar Airport and now to Varanasi Airport.

The understanding of the architectural vocabulary of Varanasi city which is the gateway to temple architecture, the Hindu architecture, the river Ganges, river side development and the skyscape of the city is very important. And, again Varanasi is the city of silk sarees and that needs to be shown and that is what we have done in Varanasi Airport, taking leads from the waves of the river ganges to create a wavelike structure, very fluid. 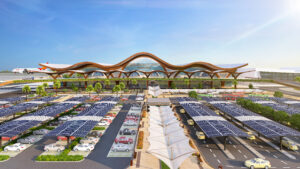 Then we started playing in the interiors where we have showcased the various artforms maybe a boat perhaps a hanging boat and then creating the Sanskrit Hindu shlokas from the Vedas.And then we talk about various false ceiling patterns and flooring patterns in terms of the carpets and silk sarees which gave a spoken language of the city transformed into architecture, art, structures and defining the spaces which gives me a feeling of the various elements when I land at Varanasi Airport. 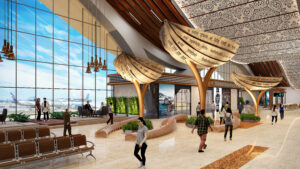 Kritika Juneja :-The structure plays a very important role while spanning such large structures. How do you think of incorporating innovation along with the dynamic character to the structure apart from serving its basic functional usage?

Prof. Charanjit Singh Shah: – In the large span structures, in the mega projects where technology has a very important role to play and we do architecture which is holistic, sometimes the vocabulary of structure is transformed into the vocabulary of architecture. As a concept which grows from engineering innovation, so it’s like transforming engineering innovation into the architectural concept. That is how the complexity of various type of structures in determining shape and giving dimensions to the architecture plays particularly in aviation. When we talk about structure, I would say that the complexity of form in terms of structure has been transformed into the functionality of the structure.

Kritika Juneja: -How important are services while designing an airport?

Prof. Charanjit Singh Shah: – Services play a very vital role and they should not be looked in isolation. They are a part and parcel of the complete design process. Sometimes what happens is we neglect the services and not make that as the holistic approach. All the elements of applied architecture are neglected and perhaps that is what needs to be understood. Holistic architecture needs to respect all elements of applied architecture in terms of services, structure and that growing process of design through the various elements is what we call as complete architecture of excellence.

Kritika Juneja: -After looking at the many airports you have designed in India and abroad, how are you able to bring a distinct character to each of them?

Prof. Charanjit Singh Shah: – Designing is like a process, the ingredients which you wish to use in a design should be well studied. Every place has got its context and all over the world, any architecture which we call as global will not have a social or cultural language. So whatever you see, the various eras of civilisations, all the landmark buildings are enabled with various eras of civilisations called as Roman or Greek. They are in a language of understanding which has grown from the functionality to the technology. And, the material innovation of the place is therefore the necessity that any of airport needs to focus while designing, considering the climate conditions, wind directions and social and cultural bondage of that place. This brings a distinct character to each airport, and that is what we have been very ambitions about.

Kritika Juneja: -In functionality every airport has similar order of movement. Your airport designs have a distinct character in terms of elevation, form & space.

Prof. Charanjit Singh Shah: – Concept of space design is very important- how the hierarchy of the spaces with the same functionality can be different in different airports. But, with the commonality of function, so now it’s the travel within the airport which should be an exclusive experience.

Kritika Juneja: -Covid -19 has impacted us in numerous ways. How you think the design of aviation sector would be different in future?

Prof. Charanjit Singh Shah:- Yes, Covid-19 has an impact on the functionality of the various airports in numerous ways but I don’t think it is a permanent sort of disease which calls for an absolute permanent solution. Moreover, socialising cannot be ignored. So some day this distancing will be removed, but perhaps, today is the time when all these things are to be followed immensely.