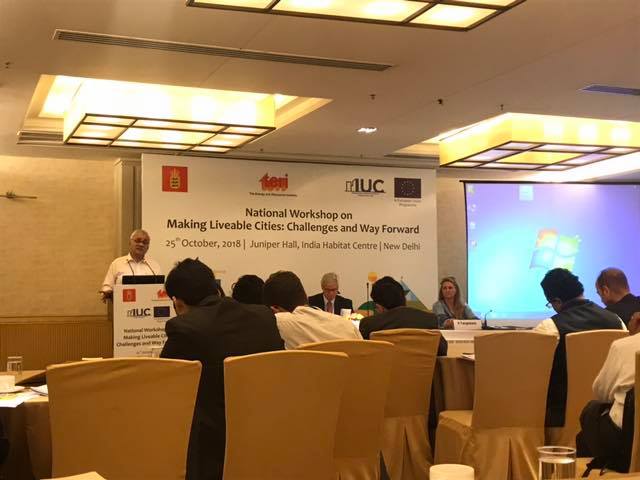 New Delhi, October 25, 2018: More than 40% of India’s population is expected to reside in its urban centres by 2050 (UNDESA, 2014). While these rapidly expanding urban centres in India are the engines of economic growth, it is critical to relook at the ways in which we manage these challenges for enhancing the liveability of cities. In line with this, and with a view to contribute to the National Urbanisation Policy being drafted currently, TERI launched a policy brief today on ‘Making Liveable Cities: Challenges and Way Forward for India’ (Read here: http://www.teriin.org/policy-brief/making-liveable-cities-challenges-and-way-forward-india). The brief highlights the key intervention areas for enhancing the sustainability of Indian cities, both by way of mainstreaming the existing policies as well as the new policy initiatives. The paper makes recommendations against ‘Urban policy and Planning’ to enhance liveability; ‘Financing and Implementation’ to contextualize funding pattern for smaller and ­financially weaker Urban Local Bodies; as well as ways to achieve ‘Urban Innovation’, among others.

The brief cites case examples of the liveable city, Aarhus, in Denmark. In order to reduce the future cost of living and production in the city, it has assembled local, regional, and national stakeholders and facilitates coordination of city investments with the physical planning of the city. Another city which has taken similar initiatives is Rotterdam, Netherlands. The city is working in close cooperation with the citizens to embed resilience in their actions, striving for a sustainable, safe, inclusive, and healthy future. In India, the upcoming Capital of Andhra Pradesh, Amaravati, is being developed on the principles or innovation, liveability and happiness. Using a participatory approach, the city planning has been done with a view to enable better social engagement and civic contribution. TERI is a partner with the state government in this project.

“Doing more from less is the way forward so that everybody is able to achieve their aspirations to the best of their abilities, thus driving economic growth of cities. We are at the cusp of very fast pace of urbanization. The ‘smart’ cities of today will be the lighthouses for the cities of the future,” said Mr Durga Shankar Mishra, Secretary, Ministry of Housing and Urban Affairs, Government of India.

Speaking on the occasion, Dr Ajay Mathur, DG, TERI, said, “Cities are growing at a rapid rate as people continue to migrate for better economic, social and creative opportunities. Besides infrastructure deficit, Indian cities are also facing issues of environmental degradation. There is, therefore, an urgent need to relook the ways in which we design our infrastructure. TERI’s policy brief aims to contribute to the National Urbanization Policy, and, thereby help coordinate a long-term vision for urban development.”

In order to promote urbanization, we should focus more on liveability instead of making the cities smart. India and Denmark have been collaboratively working towards urbanization through cross pollination of ideas. Empowering local bodies and policy makers will pave the way for urbanization and make the cities in India liveable. There is a need to have national level policy framework focusing not only on measuring but also on a long-term approach. City to city collaboration is very important and has set remarkable landmarks to take urbanization to the next level: said H.E. The Ambassador Peter Taksøe-Jensen, the Royal Embassy of Denmark in India.

TERI had conducted three regional dialogues in Vijayawada, Panaji, and Gangtok to set the context and identify the key themes to be addressed at the National Conference in New Delhi. The regional dialogues were co-hosted with the state governments of Andhra Pradesh, Goa, and Sikkim, respectively. A fourth Regional Policy Dialogue will be held in January 2019 in Rajasthan for the northern region and will focus on ‘Partnerships for Enhancing Liveability’.

The Energy and Resources Institute (TERI) is a leading think tank dedicated to conducting research for sustainable development of India and the Global South. Established in 1974, TERI has become the pre-eminent institution for research, discussion and thought leadership on environmental governance and sustainable development.

TERI is ranked globally as one of the five most impactful think tanks by the International Center for Climate Governance. The Institute is committed to the application of thought that drives action in the direction of tackling climate change.

World Environment Day 2021: Green environment is the way of future by Tripat Girdhar