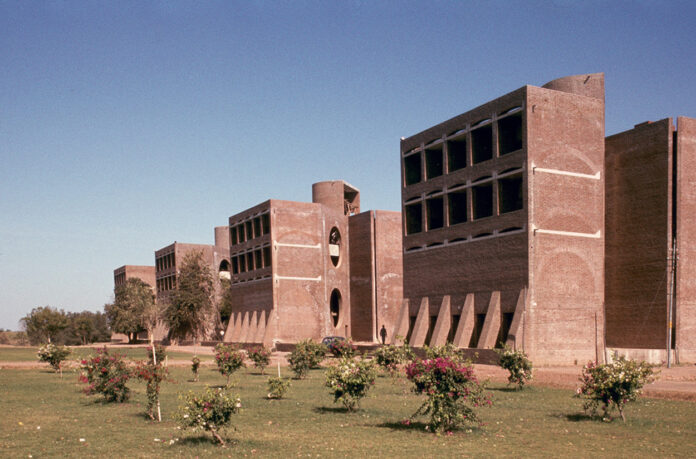 “Buildings in Louis Kahn’s Indian Institute of Management Ahmedabad Set to Be Demolished” is the caption of the eminent architectural historian William Curtis published on December 23, 2020, in Architectural Record. He has done an insightful analysis of the problem and written a persuasive piece to dissuade the authorities concerned from their suicidal resolve. For me, the heart-rending news highlights a glaring irony. It was Ahmedabad that was the first in India to discern the validity, vitality, value, appropriateness, and historical significance of Modern Architecture. This famous cultural and economic hub of Gujarat gave proof of its laudable aesthetic sensibility when it invited Le Corbusier to design four iconic buildings: Mill Owners’ Association Building, Museum (Sanskar Kendra), Villa Shodhan, and Villa Sarabhai.

The famous industrialist and philanthropist Vikram Sarabhai was the farsighted founder of the Indian institute of management (IIM), Ahmedabad. It is said that he offered the job to the young BV Doshi, but then chose the world-famous architect Louis I Kahn whom he believed to be the next best choice after the Indian’s mentor, Le Corbusier. Kahn created a Marvel of Modern Architecture such as transcends the criterion of even UNESCO’s ‘outstanding value’ to exalt architectural creativity to the realm of mystical immeasurableness. Not a single architect in the world knows this aspect of Kahn’s unique genius. I say so on the strength of my lifelong, comprehensive study and experience rooted in illustrated analysis of the theory, practice, research, and pedagogy of Modern Architecture. I call him the Mystic of Architecture so far unmatched by any of his contemporaries, including the redoubtable Le Corbusier whom I had established in my doctorate on Chandigarh in 1991 as the greatest architect, not one of the greatest of the twentieth century, as he is hailed by all and sundry. In my considered opinion, Louis Kahn stands in a class all his own. It would thus be blatantly brutal to demolish the 18 dormitories designed by him as an integral part of IIM Ahmedabad because the administration finds the restoration work of Kahn’s buildings done by the best Indian firm unsatisfactory.

The comprehensive work of restoration and updating of all of Kahn’s buildings on the campus was allotted to the Mumbai-based firm Somaya and Kalappa Consultants (SNK) after it had won it in a competition in 2014 held by IIMA. According to William Curtis, “By 2017, SNK had completed the renovation of the Library/  Lecture/Administrative block—and received a prestigious award from UNESCO for the work, which was cited as model for the restoration of other major modern structures in India. Doshi, who lives in Ahmedabad, told me the library looked as good as new.” 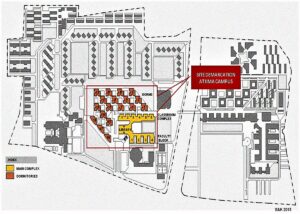 The grave irony, however, is that while the powers that be have accepted the Library/Lecture Hall/Administrative Block as an example of “heritage” architecture worthy of preservation and conservation, they have resolved to destroy the rest. The demolished buildings would be substituted by those to be designed by an architect whose name is yet to be announced. The IIMA Director and the Governing Board are temporary custodians of this incomparable masterpiece. Therefore, it is not clear who the culprit is because IIMs are autonomous institutes under the aegis of Human Resource Development Ministry of the Government of India.

Substituting Kahn’s monumental work even by the design of the best living architect of the world would be an architectural sacrilege. His grandiose architectural creation assumes the title of “heritage” only in its totality, not in its brutally maimed form. I urge Pritzker Prize-Winner architect BV Doshi, based in Ahmedabad, to take timely action. He has a lot of clout with the powers that be, and should marshal his moral and creative might to pre-empt their hideous intention seeing it implemented.

William Curtis adds, “Doshi, who lives in Ahmedabad, told me the library looked as good as new …Yet an internationally recognized expert in restoration visited the building SNK worked on and found that the renovation was altogether satisfactory.  Why the school has decided to raze the historic structures remains murky.”

Be that as it may letting it go as seem to be the macabre prospects, the move would be tantamount to the exchange of a rare diamond for a piece of lustrous glass. I am sure that the Gujaratis who have such a fine sense of discrimination in their DNA would rise to the occasion to avert the imminent historic catastrophe.

Alternatively, if the temporary custodians are unhappy with the restoration work for reasons best known to them, I urge them to demolish these 18 dormitories and rebuild them on Kahn’s original design using the latest materials that ensure longer life-span along with the state-of-the art techniques to achieve the coveted aim.