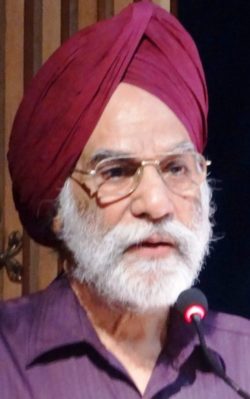 Architecture fulfils one of the three basic human needs, SHELTER; the other two are FOOD and CLOTHING. Shelter has preceded Architecture by many centuries as the Art and Science of making “The Objective Outer World of Matter” to meet the human requirements Living, Working, Recreation, and Circulation besides expressing exalted aspirations and aesthetic notions of the natural and the built environments. In other words, Man set foot on the road to civilisation when he stepped out of the cave to make his own Shelter with his own hands. That is reason enough to say, “Architecture is he matrix of civilisation”.

When I course like blood thro’ the veins of Stone

The inviolable importance of Architecture, as the “Mother of all Arts”, becomes crystal clear, when we know that it was Lord Vishwakarma who created the Universe although the three principal gods of Hindu Mythology: Brahma, Vishnu, and Mahesh, had the powers of Creation, Protection, and Dissolution, respectively. And Lord Vishwakarma, as the CELESTIAL ARCHITECT, employed only two elements: Space and Time—and the three stated primary functions of Brahma, Vishnu, and Mahesh are going on, ever since the Universe came into existence, endlessly…in self-renewing cyclical order.

ELEMENTS OF CREATIVITY are SPACE, Structure, and Form, which function in tandem with each other in the overwhelming Unity and Diversity of whatever Humans create.

In Building Design, Space pertains to Architecture; Structure to Engineering; and Form to Aesthetics.

SPACE in ARCHITECTURE is enclosed vacuity, with STRUCTURE intervening between it and the enclosing envelope called FORM.

It is akin to the Human Body in which Skeleton is the Structure that creates Space for accommodating vital physiological functions—and intervenes between Form [flesh and skin] and the Space.

Space is akin to Soul; Structure to Mind; and Form to Body.

SKELETON is the STRUCTURE of the Human BODY…

…Just as the Column-and-Beam STRUCTURE is the SKELETON of the BUILDING [That is the BODY    of ARCHITECTURE]!

Man, having been created by GOD in His own image, is essentially an Artist who started his forays into Creativity by wondering at the beauty and bounty of Nature, which is God’s manifest power [Qudrat is the Arabic word that Guru Nanak has used for it in Gurbani or the narration of his Revelation].

The word ‘Man’ is not a gender; it represents a human person, and thus includes both the sexes.

The beginning of his journey in the realm of Artistic Creation lay in the exercise of Man’s native ability [that is, God-gifted, not culturally acquired] of Aesthetic Appreciation.

Aesthetic Appreciation takes place by means of one or more of the Five Senses: Seeing, Hearing, Touching, Smelling, and Tasting.

To delve deep into the stated problem we will have to go back to the beginning: the ELEMENTS; the PRINCIPLES; and the OBJECTIVES of Human Creativity.

ELEMENTS are the simplest parts of which anything consists or into which it may be analysed irreducibly.

Space, Structure, and Form are the three Elements of which ARCHITECTURE is made.

Space is the Great Void, uninhabited emptiness, from which all that exists physically must be shaped.

A basic aim of Architecture is the creation of Shelter, which is composed of Structure and Form, just as the human body is composed of the bony skeleton and the fleshy muscles and skinny surface, the finished form.

These three ELEMENTS are there in all Forms of Art: literary, visual, performing.

Dance, Drama, Music (Performing Arts) are spatial-temporal i.e., they exist both in Space and Time.

PRINCIPLES are fundamental unchanging truths; the ultimate source or cause or origin of something. Together they constitute a comprehensive law or doctrine from which others are derived, or on which others are founded. Principles of Creativity are: Balance, Harmony, Proportion, Scale, Rhythm, and Unity.

Balance is visual (painting, sculpture, architecture) or audial (poetry, music) equilibrium (i.e., a state in which opposing forces or tendencies neutralise each other).

HARMONY results from combination or adaptation of parts, elements, or related things, so as to form a consistent and orderly whole. The German philosopher and mathematician Leibnitz uses the term “pre-established harmony”: a harmony between Mind and Matter established before their creation, whereby their actions correspond even though no communication exists between them. HARMONY is fundamental to all forms of Creativity as it produces a unity of effect or an organic whole, which gives aesthetic pleasure. With simple tools and mathematics he created a monument that stands to this day. His greatest contribution to engineering was his discovery of the art of building with shaped stones. Those who followed him carried engineering to remarkable heights using skill and imagination. The Italian architect Vitruvius’ De Architectura was published in first century CE in Rome. It has survived to tell us the kind of engineering education in ancient times.

PROPORTION and SCALE are interrelated as both deal with the problems of sizes and their relationships with one another. PROPORTION is the relation of one part or portion to another, or to the whole, or of one thing to another, with regard to magnitude, quantity, or degree. An artefact is said to be well-proportioned when the comparative relation or ratio among its parts, as to the whole, produces a pleasant (visual) effect.