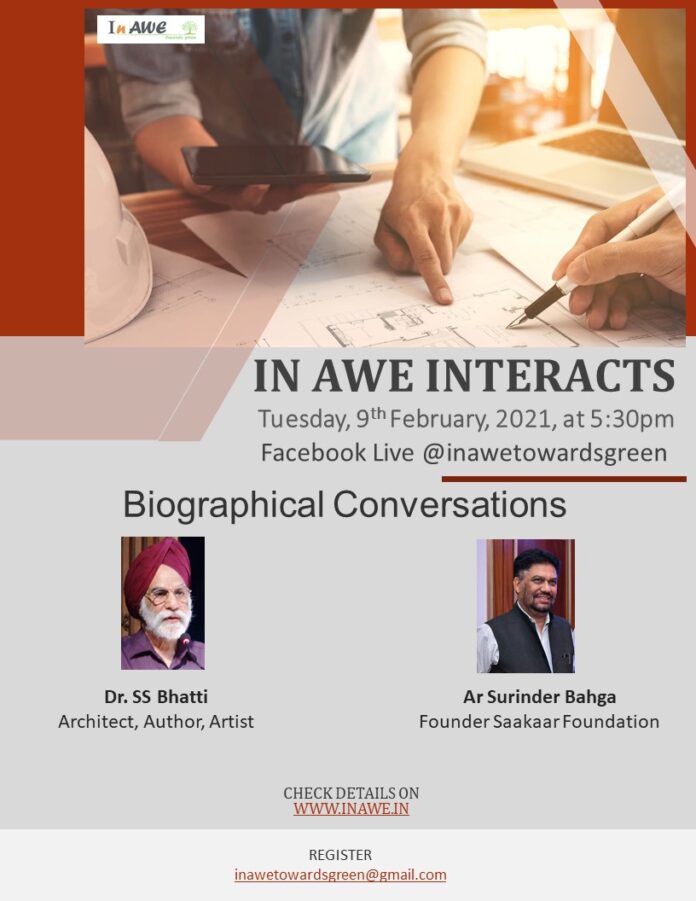 A new book titled, “DR SS BHATTI: Biographical Conversations” has been launched recently. It has been authored by Sarbjit Bahga, a Chandigarh-based architect, and published by White Falcon Publishing, Chandigarh. Foreword to the book has been written by Islamabad-based architect Jahangir SM Khan, Immediate Past President of ARCASIA (Architects Regional Council Asia)

Dr. SS Bhatti (b.1938) is a former Principal of the Chandigarh College of Architecture and a very versatile professional. He holds three PhDs and M Arch from The Queensland University, Australia. Apart from being an inspired academician and architect, Dr. Bhatti is a painter, sculptor, graphic designer, Urdu and English poet par excellence. He has authored more than 30 books on diverse fields like art, architecture, pedagogy, religion, poetry in both Urdu and English, besides other fields of human endeavor.

Architect Surinder Bahga has established architectural organization “Saakaar Foundation” in Chandigarh. His works are published in many journals and newspapers of repute. Two of his Churches were exhibited at the 5th Asian Congress of Architects, held at Lahore in Pakistan.  His work was exhibited at Archifest Exhibition organized by Singapore Institute of Architects.  Mr. Bahga was given Sir M. Visveswaraya Award in 1995 by HUDCO for energy-efficient housing design. His Baptist Church at Chandigarh is selected by Ministry of Non-Conventional Energy Sources and TERI as one of the best 41 energy-efficient buildings in India. He got Michael Ventris Award from Architectural Association, London.   Police Memorial, Jammu designed by Mr. Bahga got Outstanding Concrete Structure Award from Indian Concrete Institute.