Architecture is a field of creative excellence, envisioning a sustainable environment but in most of the country’s construction, architecture, engineering and artistic fields are still dominated by males. Instead of being valued for the quality of work produced, women tend to face gender discrimination and racism globally.

Often it is seen, that women are discouraged to take up the practical roles depending upon various types of societal diminutions imposed upon her. A report by Council of Architecture clearly states that despite the number of women being at par with men while graduating from the school of architecture, only 20 percent of them become licenced practitioners.

Where is this huge disparity happening?

Most often we tend to see women in the roles of mother, wife, nurse where they are serving others along with a sense of fortitude. This is where the difference arises in women, while seeing the same situation with an egalitarian approach as compared to their male counterparts.

Now the question is “Is this approach of dealing with situations helpful in the technical field as well?”.

And the answer to this is of course yes, there are two specific characteristics which define a woman, one is emotion and the other is grace and both the factors play a crucial role in establishing strong business connections along with having an egalitarian, collaborative and a nurturing approach while dealing with situations and coming out of the worst scenarios with grace. 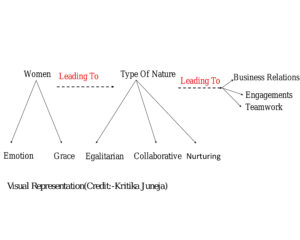 Despite of all the gendered barriers today, women artists and architects contribute a major portion of our industry. Since the advent of globalisation, many notable names of women came up who successfully emancipated the restrictions of the society and came out to be a successful entrepreneur.

Let’s discuss some of the noteworthy names among many who marked their quiddity through their quality works: –

Considering the paradox of our times, it is necessary that we allow every human being to showcase their ability to the fullest, irrespective of caste or creed discrimination to create what we may call “Architecture of Empowerment” which responds to the need of every individual while also respecting their humanity as well as learn to accord women the respect which is given to any other individual, so that we may rise together.